In anticipation of the impending changes (on July 1st  I believe?) to the alcohol laws  two new “farm breweries” in Frederick County  are slated to open soon:  Frey’s Brewing Company and Milkhouse Brewery.  Exciting times.  Ever so often the legislature actually does something good.  I look forward to their opening and as soon as possible I shall visit them and report back here.  Maybe I can get a sneak preview on one:  Milkhouse Brewery is on Stillpoint Farm which is where FirkinFest, the grand finale to Frederick Beer Week , is being held.

Flying Dog Brewery Tour- The Best $5 You Can Spend!

This past summer the Flying Dog Brewery restarted their brewery tour which had been on hiatus for something like 18 months. Rumor had it that the brewery had run afoul (or come close to running afoul of) the old law which limited the size of the samples that a brewery could give on a tour to only six (6!?!) ounces.  During the hiatus Flying Dog worked with legislators and other interested parties to get the law changed to six 3 ounce samples.  This new law went into effect July 1st and the tours resumed that day.  Signing up for a tour is easy.  Click here to make your reservation, pay your $5 per person and show up.  It’s absolutely the best $5 you can spend in Frederick.

The tour starts in their tasting room.  You are given six wooden tokens, each one good for one three ounce sample of their beer, and let loose in the bar area. 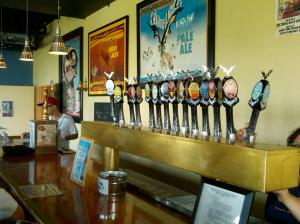 Hard decisions to make with only six tokens!

They have pretty much everything they make on draft including all the specials and seasonals.  Two knowledgable servers were pouring and on hand to answer all your questions.  Following a good while in the tasting room the tour began.  I wont bore you with a blow by blow- just go.  The people I went with ranged from home brewing beer geeks (yours truly) to casual drinkers and everyone loved it.  We saw the mash areas, the fermentation vats, the labs, the bottling line (which was running full tilt and very impressive) and finally the warehouse, which was like a Stonehenge of beer.  Interspersed we learned about the founder and how Ralph Steadman got involved. 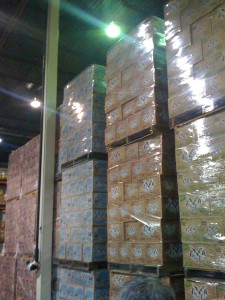 The warehouse. Can you lock me in for a night?

All questions were welcomed and the guide was knowledgeable and friendly.  We learned some interesting trivia.  For example: all the sample packs have to be made up by hand so there is some poor schlub who spends all day mixing the bottles and placing them in the boxes.  Think of that next time you buy one!  At the end we went back to the tasting room where you could ‘spend’ any unused tokens.  There is also a Flying Dog gift shop where you can purchase their beer and other merchandise.  As a lovely parting gift you get to keep the tasting glass.  I plan to go back until I have a complete set!

Filed under Booze, The Good Life

A few years ago Flying Dog Brewery came to town.  Originally a small brewpub in Aspen, Colorado it morphed into a brewery in Denver.  In 2006 they bought the old Frederick Brewing Company and since January 2008 all of their production has been made right here in Frederick.  As you know I’m a big fan of local stuff and I have enjoyed their beverages from time to time.  Well I was pleased to see that at the 2009 Great American Beer Festival (which is the Superbowl of Beer) held at the end of September in Denver, Colorado, besides giving them a bunch of medals for individual beers, named them the Mid-Size Brewery of the Year.

So in light of that I decided to go back and taste a few of their brews.  I will post my impressions here over the next few posts.

PS they have tours every saturday.  It has been on my to do list for quite some time.  Has anybody gone?

Filed under Booze, The Good Life